The Sarco Creek Re-wilding Art Project is an environmental undertaking for the community. Our world needs more wilderness and by using traditional and artistic means this project is conceived as a call to action to explore and respect our landscape.
It is a 13 acre parcel of land bordering Sarco Creek at the foot of Mt George (1,877 ft elevation)—known originally as Bald Mountain and two miles east of the city of Napa. The land is adjacent to Napa County’s Foote Botanical Preserve. 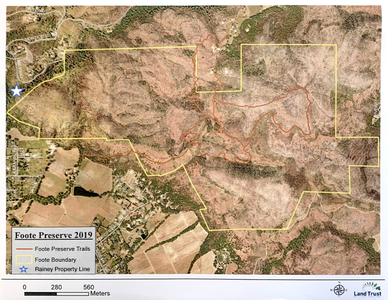 Both preserves are on the traditional lands of Onasatis Wappo first peoples. Their philosophy of understanding the plants, the trees and the creatures of the land helps to guide the Re-wilding Art Project.
My land was previously owned by a pumice quarrying company which had altered the natural landscape, sometimes quite brutally. One of the many consequences was the introduction of non-native plants. Under my ownership I have worked to eradicate the invasive plants and am restoring the land to it’s natural state with the help of knowledge gained from research and expert advice from many sources including the California Native Plant Society and the Land Trust of Napa County. 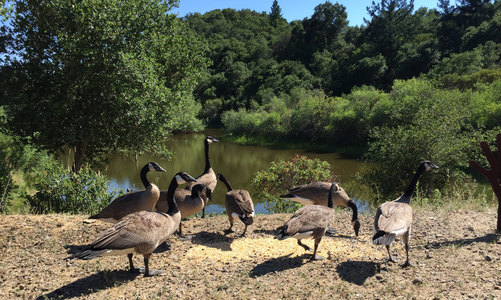 May 2010
To understand the landscape, we need to know the natural history. The geologic origin of the land is volcanic, formed 3 to 5 million years ago (Sonoma Volcanics), long before our Homo Sapien ancestors walked the earth. The hardness of igneous rocks, which are formed by volcanic activity, is responsible for the extensive rock outcroppings and the thin alluvial soil.

It is the natural landscape for chaparral which includes manzanita, bay and coastal oak and different species of the evergreen tree madrone. Chaparral is made up of drought tolerant shrubs which are known for their rapid regeneration after fire. The regeneration mechanisms includes the ability to re-sprout after fire—which has historically occurred every few decades—and produces seeds which are dormant until stimulated to germinate by wild fire. Chaparral thrives on nutrient poor soils which characterize post-fire erosion. 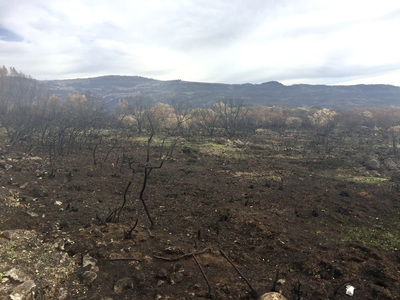 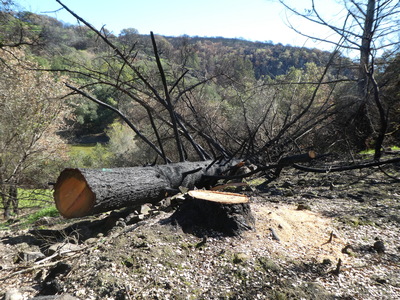 November 2017
Sarco Creek, with it’s abundant water and cool air drainage, hosts a wide variety of other trees and shrubs which are water dependent and often broad-leaved and deciduous. The creek also provides a welcoming habitat for animals that have an aquatic life stage such as frogs and dragonflies.

Surprisingly, a redwood grove is located on the preserve, the most easternmost stand naturally occurring in California. Most redwoods are found along the coast due to their reliance on the moisture of fog. The seasonal fog of Mt George is responsible for this magnificent and unique redwood stand.

My Re-wilding Art Project is well underway. I am slowly altering the landscape to remove invasive plants, replant native Californian plants and sculpt the disturbed landscape to align it with the natural curve of the land as it was before the damage caused by quarrying.

Breeding ducks and geese have been attracted by the shaded earth island which I have constructed in the pond. Wood duck nesting boxes on the pond bank are now home to a new generation. And the long tracts of wilderness act as safe migratory highway.

Following the inspiration of Richard Long, an English sculptor and practitioner of Land Art, I walk through my woods repeating the steps until a path emerges under foot. By tracing my movements through space, these paths lead to secluded points where one will find a seat and a small hidden library with books on nature, poetry and philosophy. These are spots for reflection, solitude and tranquility.

I have witnessed nature in it’s beauty and brutality and listened to the silence and the roar of living creatures. And the night sky free of light pollution, allows one to gaze up and wonder at the stars as the constellations cartwheel overhead throughout the night.

The Sarco Creek Re-wilding Art Project is a creation, a passion and a responsibility to our lives and the next generation. 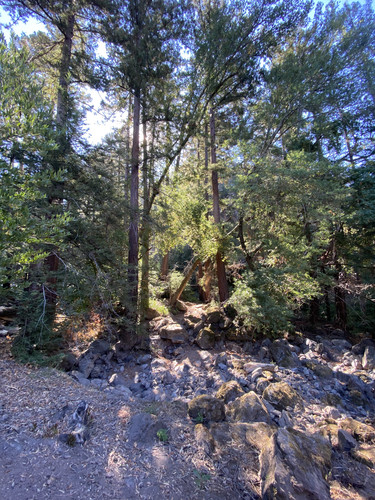